An ohmmeter is used to measure the resistance of various circuit p arts, and can be used to check for open or shorted circuit parts, and for circuit continuity. In every case, however, in order to avoid damaging the ohmmeter, make sure that a voltage source is not connected across the ohmmeter prods while you are making a measurement.The ohmmeter circuits have their own battery power sources  to  make  tests. Resistance readings are  only  made  on  deenergized circuits. If the circuit were energized, its voltage could cause a damaging current to flow through the meter. 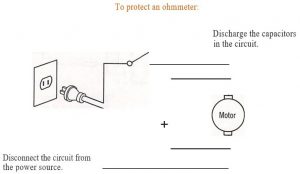 When making resistance measurements in circuits, each part in the circuit can be tested individually by removing the part from the circuit and connecting the ohmmeter prods across it. Actually, the part does not have to be completely removed from the circuit. In most cases, the part can be effectively isolated from the circuit by opening only one of its connections to the circuit. Some manufacturers provide charts that list the resistances that you should measure from various test point s to a reference po int in the equipment. There are often many circuit parts between the test point and the reference, or common, point, and when an abnormal reading is obtained, you must begin checking smaller groups of parts and individual parts in the circuit to isolate the defective part.

If you do not have resistancecharts available, be very careful to make sure 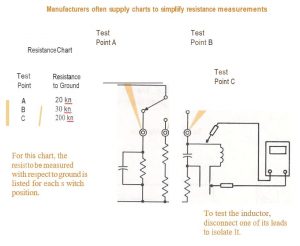 You should have some idea of the nonn al reading expected in each test, so that you will know when you get a  reading  that  indicates  trouble. There  are  many other tests oh mme ters are used for: to check for continuity or open circuits or lines, to check  for short circui ts, to  check  for proper or improper grounding, and to test for in sulation breakdow n. Breaks in an electrical line are  tested  for by putting the  ohmmeter  leads on  opposite  ends  of  the  suspected  line. If  the  line is not open, very low or zero ohms will be read,  depending  on  the size  and length of the lin e. On long lines, where  it  is difficult  to  test  across the length of the wire, two wires in a pair can be temporarily spliced at one end, and the two wiresmeasured at the other end. If there is con tinuity in both wires,only the low resistance of the wires will be read, depending on the size of the wires and their length. This same two-wire method can be used to check for  shorts  between wires. If the two  wires  are  not  spliced  at  the  other  end,  no  resistance  or contin uity should be measured. If  the  wires are  spliced,  a  sho rt  in  the  lines wou ld cause a lower than normal reading  because  the  effective length  of  the lines is reduced by the location of the short. If you  kn ow  the wire  size, and its norm al resistance per foot, you can estimate how  far away  the short is by  the total  resistance.

Grounding tests are made to make sure that the side of the power line that is supposed to be grounded shows zero to the ground elements, and the hot lines show hi gh or infini te ohms, to show that they are off ground. Insulation tests are made to check that the insulating material between wires has not broken down or become damaged, so that they still isolate the wires.

For all ohmmeter tests, yo u mu st make sure that there are no circuit parts, such as motor or generator windings, resistances,lamps, switches, etc., that will form branch or parallel  circuits to give misleading resistance  readings. 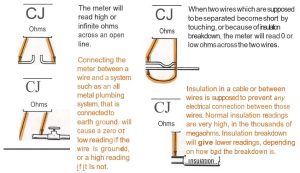