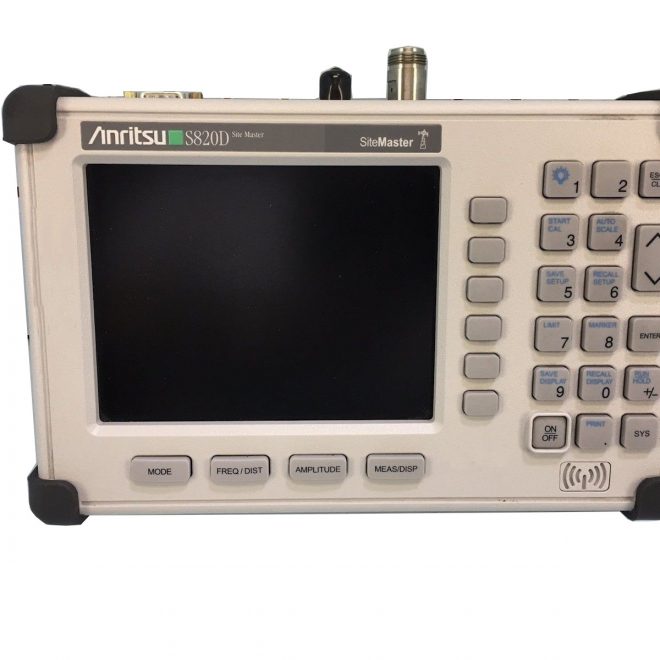 The Broadband Site Master S810D is a Cable and Antenna Analyzer designed by Anritsu. This model has a sweep speed of 2.5 msec/data point and a TFT LCD display.

S810D by Anritsu is a Cable and Antenna Analyzer in the Site Master series. S810D features a Battery Life of 1.5 hours and a Weight of <5 lbs.

The S810D Broadband Site Master Cable and Antenna Analyzer is designed by Anritsu and ideal for field confirmation, installation, troubleshooting, and maintenance of communication systems and microwave cables. The S810D can be utilized by point-to-point operators, microwave site installers, point-to-multipoint operators, private/public networks that support microwave links, manufacturers of radios, and even defense programs responsible for the installation and maintenance of microwave cables.

The Anritsu S810D has numerous enhanced features over former models, such as: power monitor measurements can be made four times faster, more advanced calibration support for TNC cables, an additional feature to increase preciseness of cable loss measurements, and an added CW source module for two-port cable loss measurements of long cables (which operates as high as 20 GHz).

Along with these new and improved features, there are standard features on the S810D Broadband Site Master as well. SWR and Return Loss measurements can be made to guarantee the system is meeting the required performance stipulations. The user can effortlessly switch back and forth between the SWR and Return Loss modes. However, the greatest advantage of these measurements is that they can be completed without the necessity of ascending the tower. The Return Loss measurement cannot determine the exact location of a fault in the cable system. Instead, the distance-to-fault measurement is used to specify problem areas because it provides the magnitude of signal reflection and the position of the signal irregularity. Cable loss measurements decide the level of insertion loss in the cable feedline system. The smoothing feature increases preciseness with this measurement.